A Tribute to Jill Jackson

There’s a picture of Jill Kremer conducting a song in front of “my little choir,” as she describes the group. The “choir” in the photo is a line of dolls. Jill was 7 years old. Another old picture shows Jill conducting her three young siblings, all holding tiny musical instruments.

Who could have guessed that decades later Jill Kremer Jackson would be celebrating her 26th and final year as music director of Holy Rosary Catholic Church and conductor for multiple choirs? Certainly not Jill. “I had no thought I might do that for real one day,” she says.

Jill quietly celebrated her 25thanniversary at Holy Rosary last year as did her lifelong friend, parish secretary Cindy Johnson. Then, Jill retired at the end of June 2022, after leading an adult choir that became one of the largest and best in the Evansville Diocese and organizing a youth choir that gave musical opportunities to hundreds of parish youngsters.

Choir members are enthusiastic in their praise. “Jill has been Holy Rosary's most remarkable asset during her 25-year tenure, directing not only the choir and the bell choir but seeing to all the music sung and played at liturgies and special celebrations,” Barb Klein said. “She brought out the best in everyone because of her dedication to excellence and her determination that if it's to be done, it must be done correctly. She brought her deep faith with her, and that quality began to permeate the choir members individually. Not only did she bring out the best in us, but she also did it with finesse and kindness.”

Jill’s career path initially included a business degree from the University of Evansville and jobs mostly with service-oriented organizations such as the Rehabilitation Center. After several years, she was encouraged by her husband Bill to pursue her lifelong interest in music ministry. She returned to college, Kentucky Wesleyan, and commuted to and from Owensboro for more than two years to earn a music degree.

Music has always been a vital element in her life. She fit immediately into a musical, religious family. Her mother, Joan Kremer, posted this note in a Bible when Jill was 2: “Sings all the time.” Another note indicated the first word Jill spoke was “Jesus.”

By the time she was in the fourth grade, Jill joined a Holy Spirit Church youth choir that sang for funeral Masses and parish liturgies. She began cantoring for parish Masses in the seventh grade and became a member of a newly formed Holy Spirit adult choir, along with her mother and her sister Karen, while a freshman at Memorial High School. She sang in the Memorial concert choir for four years while remaining in the Holy Spirit choir those years and many thereafter. In her 30s, she sang and toured with the Kentucky Wesleyan Singers. She also sang in national choirs of the National Association of Pastoral Musicians in concert at the Basilica of the National Shrine of the Immaculate Conception in Washington, D.C., as well as in other major cities.

Those experiences served to create a kinship with the choir members she recruited after being named music director at Holy Rosary in 1996. Fifteen members who joined the choir in Jill’s first year still sing with the group. Many others who followed have remained with the choir for 20 years or more. A bond developed within the “choir family,” as they call it, that resulted in a joyful experience despite sometimes arduous preparation.

Jill’s earliest days at Holy Rosary were among her most challenging. Advent and Christmas were looming as she started her first workday on Nov. 11, 1996. No choirs were in place and no permanent organists. The task ahead: six Christmas masses involving young instrumentalists, cantors, two children’s choirs, an adult choir and a high school/college orchestra. Jill appealed for parishioners to join the adult choir with the enticement that no experience was needed and no audition required. About 25 singers responded. “It was a huge challenge,” Jill says, “but the Lord provided and with the help of volunteers, hard work and prayers, it all came together.”

Among the first choir members was Jill’s mother. Joan agreed to help out the first Christmas and wound up staying in the choir for another 20 years or so. “It was such a blessing to me,” Jill says. Joan died on May 29, 2022. The choir, many with tears in their eyes, performed at her funeral. A public reception that had been planned for Jill’s retirement was postponed.

Following that first Christmas performance, the choir eventually grew to as many as 45 members, one of the largest choirs, if not the largest, in the diocese. The area in which the choir sings has been increased in size three times and can be enlarged no more. “It speaks well for the Holy Rosary music volunteers that we have so many we can’t fit them all in the choir area,” Jill says. “That’s a nice problem to have.”

Jill also started a youth choir and later added hand chimes, which proved so popular among Holy Rosary students that she had to break the choir into two groups at one point. With no commercial music available, Jill initially arranged and notated on poster boards every song the bell choirs performed. A song she wrote, “We Will Build the Kingdom,” became a standard for the choir and has been distributed to other schools and parishes. It was one of several songs she has written that have been used in liturgies.

Another song she wrote, “I Thank My God,” based on scripture of St. Paul to the Philippians, initially was a gift to her husband Bill on Valentine’s Day. She arranged a choral version which the adult choir sang for her parents on their 50th wedding anniversary. Since that time, the song has been used for weddings and funerals and special liturgies. She also wrote “Angels Sing Gloria,” a Christmas song that was one of several she recorded for a CD sold as a fundraiser for the choir. A couple who were members of the Holy Rosary choir later commissioned Jill to write a song in honor of their late mother. “Behold the Beautiful Mother” became a choral mainstay for liturgies honoring Mary, the Blessed Mother.

Jill is amused when people occasionally express surprise that her job is full-time. Her responsibilities have included: planning and preparing music for all parish liturgies such as weekend Masses, bilingual liturgies, holy days, Holy Week services, weddings and funerals; serving as cantor for parish liturgies as needed; hiring and overseeing parish accompanists; recruiting and training volunteer parish musicians; setting schedules for the adult choir, bell choir, cantors and instrumental musicians; conducting all rehearsals and Masses of the adult choir and the bell choir; researching, selecting and, if needed, arranging music for all parish liturgies, including arranging all music notation for the bell choir; managing the parish music budget; and monitoring and reporting copyright information related to live-streaming liturgies.

And sometimes she helps clean up after special events. Really.

The merger of Nativity with Holy Rosary created an especially busy time for Jill. “Nativity had a large and active Latino community,” she says. “When the parishes joined, one of my tasks was to find a way to do bilingual music for bilingual worship.” She brushed up on her high school Spanish and taught her choirs to pronounce and sing Spanish. She also taught the congregation and designed worship aids for bilingual Masses.

Highlights of her 25 years at Holy Rosary? “Hearing the music that we have prepared for a certain liturgy and have worked so hard to master, and then to hear it implemented at the beautiful Christmas and Holy Week Triduum services. People tell us later how meaningful the music was and how it helped them pray and experience the liturgy more fully. It is so meaningful to me that I am involved in something that helps people pray and experience the liturgy more deeply.”

She praises her choirs for making the music come alive. “I can organize, I can schedule, I can work with them, help them improve their singing. But they have to execute it, they have to do the work, they have to choose to embrace it, to take it on and do as well as they can with it. I think my gift is more teacher and cheerleader.”

She also gives much credit to Father Bernie Etienne for his support. “He has an expression he uses with all the staff when he’s dealing with us,” she says. “He will say, ‘I just want you to be happy.’ He says it in a light way, but he really means it.”

“Holy Rosary has been a wonderful place to work,” she concludes. “The staff is like a family and work so well together and have such a good time together. Everyone is so supportive of each other.”

The little girl who “sings all the time” is a little older now. But after 26 years at Holy Rosary, she is still singing – and it’s a good bet that even in retirement she will continue to lift her voice to the Lord. 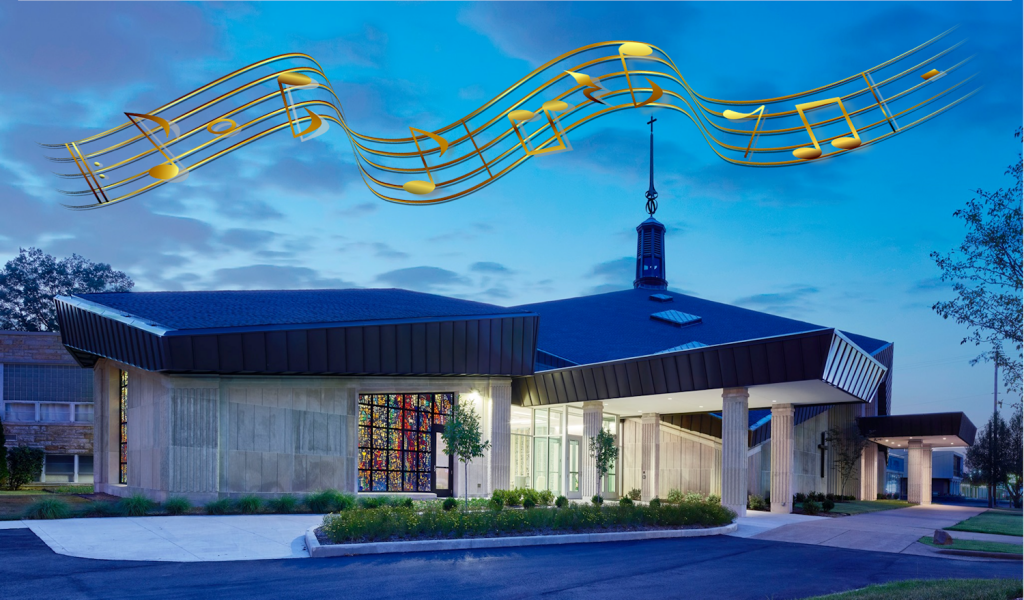